Under U.S. pressure, the World Health Assembly unanimously approved a resolution calling for a review of WHO's pandemic response.

GENEVA (AN) — Under fire from the United States, the World Health Organization's top governing body unanimously approved a resolution on Tuesday calling for an independent review of its response to the coronavirus pandemic.

The 194-nation World Health Assembly's resolution calls on WHO Director-General Tedros Adhanom Ghebreyesus to carry out an "impartial, independent and comprehensive evaluation” of the WHO-led international response to the COVID-19 outbreak “at the earliest appropriate moment.”

Co-sponsored by more than 130 nations, the European Union-led seven-page resolution does not specify who should conduct the review or when it must be completed. It requires officials and nations to "review experience gained and lessons learned" from the WHO-coordinated global response to COVID-19 and to recommend ways "to improve capacity for global pandemic prevention, preparedness and response."

China and the United States did not object to the resolution, adopted by consensus on the second and final day of the World Health Assembly, after the two nations, locked in a broader power struggle, squared off over the origins of the pandemic, the future of the United Nations health agency and who pays for it.

"As WHO convened ministers of health from almost every country in the world, the consistent message throughout the two-day meeting — including from the 14 heads of state participating in the opening and closing sessions — was that global unity is the most powerful tool to combat the outbreak," WHO said in a statement after the assembly ended. "The resolution is a concrete manifestation of this call, and a roadmap for controlling the outbreak."

China and the United States used the assembly as a proxy battle, leaving E.U. leaders to seek the middle ground. Europeans called on nations to support WHO and its efforts to lead the response to the pandemic despite U.S. President Donald Trump's attempts to undermine WHO's credibility, leadership and funding.

Trump did not participate in the assembly, but as it opened he sent Tedros a four-page letter threatening to permanently withhold U.S. funding and to withdraw from the U.N. health agency unless it makes “major substantive improvements” within 30 days and shows that it can "demonstrate independence from China.”

In a sharp contrast, Chinese President Xi Jinping announced at the start of the two-day assembly that Beijing will donate US$2 billion over two years toward global health efforts to fight the coronavirus and will also send Chinese doctors and medical aid to developing countries in Africa and elsewhere to assist in the effort.

Trump's escalating attacks on WHO are based in part on his belief that it did not do enough to stop the virus from spreading beyond Wuhan, China, where it was first detected late last year. Xi told the assembly that China quickly and transparently shared data on the outbreak.

"In China, after making painstaking efforts and enormous sacrifice, we have turned the tide on the virus and protected the life and health of our people. All along, we have acted with openness, transparency and responsibility," Xi said in his speech.

"We have provided information to WHO and relevant countries in a most timely fashion," he said. "We have released the genome sequence at the earliest possible time. We have shared control and treatment experience with the world without reservation. We have done everything in our power to support and assist countries in need."

But Chinese officials have apologized to the family of the late Dr. Li Wenliang, a 33-year-old ophthalmologist at Wuhan Central Hospital who was reprimanded by local authorities for "spreading rumors" in late December and early January. He was the first whistleblower to publicly warn others about the emergence of a new coronavirus, but died in early February after contracting it while treating patients in Wuhan.

China originally reported a cluster of cases of pneumonia in Wuhan to WHO officials on December 31. Wuhan officials then allowed a mass banquet to be held for tens of thousands of people while millions of visitors arrived for Lunar New Year celebrations — helping to spread the virus — during the six days that passed after Chinese officials secretly determined they likely faced a pandemic from a new coronavirus, The Associated Press reported.

Xi only warned the public on January 20, seven days after Chinese officials had detected the danger, according to documents obtained by AP and Chinese Center for Disease Control and Prevention estimates. Yet Tedros, a politician and public health expert who formerly headed Ethiopia’s foreign affairs and health ministries, has praised China's handling of the outbreak during its first weeks, leading to accusations of enabling a cover-up.

Chinese officials agreed on January 28 to allow WHO's international experts to enter the country as soon as possible. Tedros said after meeting with Xi in Beijing that their agreement would help “guide global response efforts.” Two days later, WHO called the coronavirus outbreak a global health emergency, its highest alert. Announcing the decision on January 30, Tedros heaped praise upon China.

"We would have seen many more cases outside China by now — and probably deaths — if it were not for the government’s efforts, and the progress they have made to protect their own people and the people of the world," Tedros said in a speech at the time.

"The speed with which China detected the outbreak, isolated the virus, sequenced the genome and shared it with WHO and the world are very impressive, and beyond words. So is China’s commitment to transparency and to supporting other countries," he said. "In many ways, China is actually setting a new standard for outbreak response. It’s not an exaggeration."

Wedged in the middle

WHO declared the COVID-19 outbreak had become a full-blown pandemic — the first time for a coronavirus — on March 11. Repeatedly during the pandemic, Trump has dismissed the U.N. health agency as a tool of the Chinese government, which he also maintains is not paying its fair share of WHO's budget.

However, Trump falsely claimed in his letter to The Lancet, released in a tweet on Monday to coincide with the opening of the assembly, that WHO “consistently ignored credible reports of the virus spreading in Wuhan in early December 2019 or even earlier, including reports from the Lancet medical journal."

"This statement is factually incorrect," the journal wrote in a statement, which it also released in a tweet replying to Trump's letter. "The Lancet published no report in December 2019, referring to a virus or outbreak in Wuhan or anywhere else in China."

The prestigious medical journal wrote in the statement that its first published reports on the new coronavirus were on January 24, based on the work of Chinese scientists and medical doctors.

"The allegations leveled against WHO in President Trump's letter are serious and damaging to efforts to strengthen international cooperation to control this pandemic," The Lancet, a weekly peer-reviewed journal, wrote. "It is essential that any review of the global response is based on a factually accurate account of what took place in December and January."

Trump's letter to The Lancet, which contained a number of other misleading and false statements, upped the stakes on the White House's previous attempts at scapegoating and threats of budget cuts. It posed a difficult challenge for Tedros, who has tried to walk a fine line between pushing back at criticism and keeping the U.N. health agency's biggest financial donors on board.

Less than two months ago, Tedros also had heaped praise on the Trump administration for doing a “great job” responding to COVID-19, despite his administration's slow, confused reaction to a pandemic that has brought on a global recession and shuttered schools and businesses amid efforts to slow the spread of the virus.

Tedros told the assembly he now plans to initiate the review "at the earliest appropriate moment" and will assess international efforts to fight the pandemic "including, but not limited to" WHO's part in the response.

"We welcome any initiative to strengthen global health security, and to strengthen WHO, and to be more safe," he said in his closing remarks to the assembly. "As always, WHO remains fully committed to transparency, accountability and continuous improvement. We want accountability more than anyone."

The United States is the biggest financial backer of WHO through its voluntary and mandatory contributions as a U.N. member nation. The U.S. Congress, which controls the nation's purse strings, often ignores Trump administration proposals to cut payments to WHO, other international organizations and foreign aid.

U.S. contributions now come to US$450 million a year — US$115 million of that is mandatory dues — towards WHO’s more than US$4 billion budget, according to WHO budget figures. After the United States, the United Kingdom and the Bill & Melinda Gates Foundation are the U.N. health agency's top financial supporters.

At a White House press briefing, Trump said he would halt payments to WHO as his administration spent 60 to 90 days reviewing WHO's role in “severely mismanaging and covering up the spread of the coronavirus.” Trump has repeatedly called COVID-19 the “Chinese virus” to emphasize its origin.

In the months since COVID-19 was first detected and spread into a pandemic, WHO's coordination of the world's response has been a high-profile gambit with millions of people's lives and the world economy at stake. In doing so, the global health organization — and Tedros himself — is increasingly wedged between China's rising global ambitions and America's lagging global reputation in the Trump "America First" era.

"It is not that the United States has ceased to exist — far from it. But it has left behind any ambition of global leadership and any function as a global inspiration," Carl Bildt, the former Swedish prime minister who co-chairs the European Council on Foreign Relations, wrote about the World Health Assembly's annual meeting in a Global Opinions column published in The Washington Post.

"And it was the European Union that carefully maneuvered the diplomatic work needed to get a global consensus around a resolution calling for a comprehensive review into the handling of the coronavirus pandemic," he wrote. "This was the post-American world on display: China assertive and confident. Europe trying to save what can be saved of global cooperation. And the Trump administration mostly outside firing its heavy artillery in all directions, but with limited actual results." 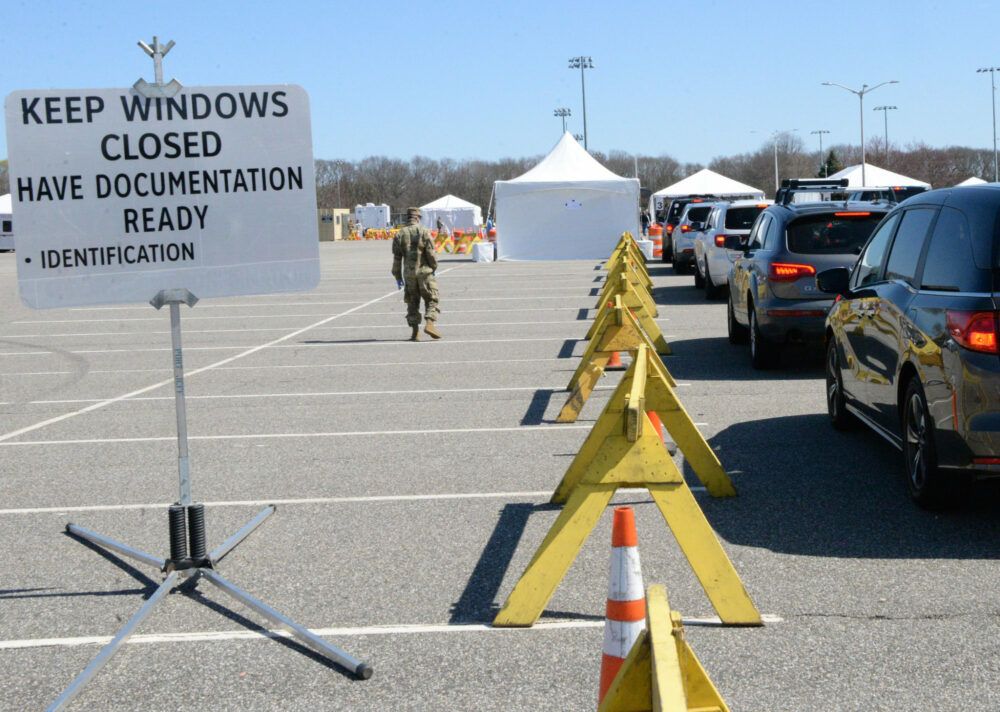